In Search of Blackbeard

As promised at the end of the last post (which I've heard made no sense to some, but hopefully now it will), here are some photos from our visit to the Pirate Ships at the Rose Festival Waterfront Village in Portland. Sarah and Chloe were troopers when you consider their specific lot in life right now and the fact that they were sitting on an old rocking ship in the hot sun - let's just say that Sea Sickness and Morning Sickness are really the same thing in the end!

Of course the boys (Daddy and Aiden) had a great time. You can see Aiden about to "anchors aweigh" and then posing with "his girls" and then giving his approval to the "caliber" of that cannon (which was real, by the way). These photos were taken with the camera on my cell phone, so the bright morning sun was a bit much for it - I seem to always forget a real camera at important events. In the end, Aiden absolutely did not want to leave...he actually thought we were going to set sail with them and he was content to sit on the deck, in the hot sun, with no prospects for lunch, and stow-away to some far-flung locale where he could earn his peg leg and eye patch like any respectable pirate would - I actually felt bad making him get off! 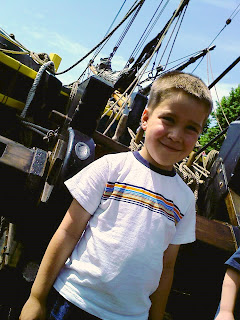 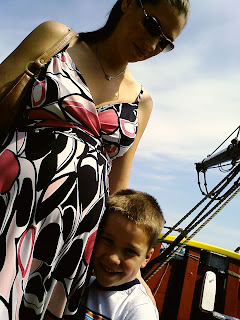 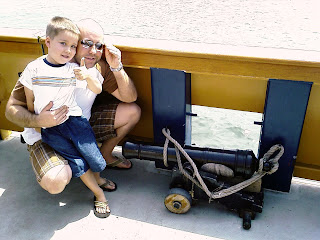 Oh yeah, we decided on a middle name for Chloe: Ann.
We really wanted to keep her middle name a family name like we all have (middle name factoid: Aiden's middle name is Marcellus - after his Great Grandpa Marcellus "Marky" Barrett) and we thought that Sarah's middle name "Ann" sounded good with Chloe.