Christmas In The Hospital

This post comes to you via the hospital's free Wi-Fi...

We've been snowed in since early last week. The whole time Chloë's been sick. Really sick. For about 9 days.

What we found was the opposite. We brought her to the hospital early Christmas morning and they decided to admit her for the day/night. A small army of doctors and specialists can't figure out what the deal is.

Chloë
She's perking up a bit after her IV and some meds - but we'll see - we've been tricked a few times this past 9 days already into thinking she's improving only to watch it all change.

Aiden
He's being a good sport. Really supportive and concerned for his lil' sissy. He's patiently waiting to get at his presents under the tree at home and the stocking by the fireplace...probably tomorrow night, or later.

Sarah
She's hangin' in there. Watching her little baby go through all this misery and not being able to do anything about it has been really hard. She's tired and could use some rest - and relief from watching her daughter suffer.

Robert
I'm hangin' in there also. I'm networking with folks to pray and writing posts (like this one) to keep you all informed. I'd be doing a lot better if we could just get to the bottom of this and be over with it. Poor little Chloë wants that more than anyone.

Thank you all for your prayers.
Posted by Unknown at 5:17 PM 3 comments:

I'm Not A Hobbit, I Just Play One On TV!

I've often looked at Chloë and thought: "Her tall size notwithstanding, she could be a Hobbit-baby!"

Hobbit children from the LOTR movies.

Our child (not actually a hobbit) 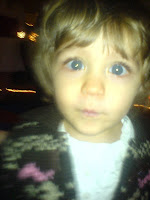 See the picture below. Look closely. Note the height at which there are no ornaments...only lights. That is about the height that Chloë can reach.

That child has ingested more tree-ornament glitter than is allowable by the FDA (if there were a "daily glitter allowance")! 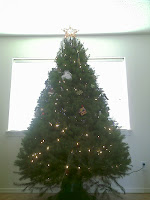 Problem Solved.
Posted by Unknown at 10:41 AM No comments:

I can't believe this will be our 100th post. Some people scrap-book, others blog.

This was a truly difficult list to pare down! If you haven't figured it out yet, I'm truly blessed.

She likes to put on shoes, wear hats, wear coats, and carry purses. A lady must always be prepared for whatever she might encounter. Even if it's 13 feet away by the kitchen. 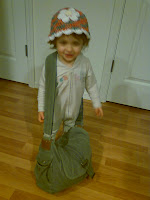 Sorry about the blurriness, she was too giddy to hold still and I've come to terms with the fact that the camera on my phone is garbage.
Posted by Unknown at 7:53 AM No comments:

Sarah was giving Aiden a ride on an ATV or "quad" as they're called: